SFX Party with the stars!

The lovely folk at SFX have organised an Evening with SFX to celebrate their Summer of SF Reading. It takes place at Waterstone's Piccadilly store in London on May 10th. There'll be an in-store book signing open to all in the early evening, followed by an exclusive, ticket-only function where the fortunate few can mingle with the likes of Adam Roberts, China Miéville, Michael Cobley, Stephen Hunt, the mighty Mr Graham McNeill and SFX editor Dave Bradley. Oh yes, and me! AND what SFX describes as 'probably some surprise guests as well'. I'll also be on a panel with some of the distinguished gentlemen mentioned above, where the topic for discussion will be: “Millions of people watch SF on TV and at the cinema – why don’t more people read SF books too?” You can find all the glorious details, including how to get your mitts on one of the exclusive tickets, here.

Crikey! AND some more! What a Friday this is!

Take a bite of this for another preview hit.

And then look at this double-header: Guardians AND Nova bowing out (into The Thanos Imperative) in truly cosmic style (scroll down the power rankings)!
Posted by Dan Abnett at 6:00 pm 2 comments:

You want an exciting comics preview this fine Friday? Do ya? DO ya?

Thanks to Mike Mignola, I now know that today is the 75th anniversary of the release of The Bride of Frankenstein. Wow. Seventy-five years!

And so to Cardiff, which was as lovely as I remembered it, and where everywhere feels like you’re in an episode of Doctor Who or Torchwood, for obvious reasons. Had great, work-related doings there which I can’t talk about yet, nor even offer material on which to speculate. Yes, I know. I am an absolute spoilsport. Or ‘soilsport’, as I just typed.

But instead, I can tell you that I will be playing a part in the Sci-Fi London 9 event during the weekend of the first of May. Sci-Fi London is an international festival of science fiction and fantastic film, and they’ve got a great programme of events on offer this year, which you can find here. I’ll be around on the Saturday morning to talk about the heady days of Marvel UK on this panel. Though the panel deserves to stay on-topic, if you’re in the vicinity, I’m sure I might be in a position to chat about other stuff once panel duties are done.

Further news here soon on some other appearances I hope to be putting in over the next few months.
Posted by Dan Abnett at 6:00 pm 15 comments:

How Do You Do, New Doctor Who?

It’s said we all have our own Doctor Who. I don’t think it’s anything to do with favorites in a conscious sense, I think it’s about the Doctor you encounter at a particular, receptive point in your life’s geography. I find myself, like many, referring to ‘my’ Doctor in terms that make him sound like part of a map. ‘My’ Doctor is Third and Jo, though I’ll very happily, on a good day, ride all the way down to Fifth and Tegan. I’m also quite fond of Seventh and Ace, because I worked there for a while, especially the junction where it meets Hex.

So I can remember when all of this was fields. Everything from Eighth on up, no one was ever going to build here. Until they did. I don’t envy Matt Smith at all (except for, you know, the fact that he’s Doctor Who). It’s not that he’s got generations of crusties like me to win over, people who say or write (in the newspaper TV reviews) that you can tell you’re getting older when Doctor Who starts looking younger. It’s not as if he’s even got to compete with the area of outstanding grade 1 listed national importance of Fourth and Sarah-Jane, the Who that is still the definitive Who in the Who who’s who. Matt Smith’s real problem is David Tennant, so he’s got this generation to win over, a generation that doesn’t know the old streets downtown, but loves to hang out at the shiny new uptown development.

Yes, I will stop it with the analogy now.

Tennant’s a tremendous actor, and his charisma is undeniable. By the end of his tenure, there was a sense he was relying too much on the manic and the madcap, too much on the notion that the audience would love the Doctor no matter what he did. On the strength of two episodes, Smith excels when he is restrained. His debut needed a sense of urgency, but it worked least well when it was hectic and Tennant-ish (the last ten or so minutes*). He’s much more interesting (and the tension really ratchets up), when he seems to be thinking about things. I think he’s in with a fighting chance of becoming a favourite, even though it seemed as if David Tennant had been so bright a flash, no one stood a chance of being seen in the afterglow.

The new series is good. It’s too early to carp. Away with you, with your comments that the Smilers in their booths were too Big! Away with you, with your notion that the space-whale plot too closely resembled the story in the pilot of Star Trek: the Next Generation! Nothing’s original, and anyway, look what we did get: pistol-packing Sophie Okonedo! Sinister test cards! The TARDIS as a phone box you could call (that last one was a brilliant wrinkle).

But there was one thing. You knew that was coming, didn’t you? Actually, it was Nik who flagged it up. It’s fair to say she’s less... tolerant of Who than me or the girls. The merest plot inconsistency, and she goes off like a car alarm. Anyway, her concern was that Amy entirely saved the day. The companion took all the power from the Doctor’s hands. Nik is convinced that this is a Very Bad Thing and another example of declining standards.

It’s clear the Beeb has insisted the programme makers cast younger actors in the lead role. The avuncular relationship that previous Doctors have had with their companions was all but eroded away by the time we reached Mr T, and now it’s gone completely. Amy and the Doctor are, to the audience at least, on a level. They could be a couple. Yes, it’s a great thing the assistant is more than just a piece of screaming eye-candy who does nothing except need to be rescued. But show the Doctor up? Out-Doctor the Doctor?

I’m a little worried too. My theory is this: given the obligation to cast younger, Stephan Moffatt may have decided to use this as a plot point. He’s a really, really smart guy, after all. Maybe he’s going to make this youthful equivalency a major and recurring issue in this incarnation. Let’s hope so, or that’s another part of the essential Doctor Who recipe ditched, along with weekly cliffhangers and genuinely eerie (rather than just exciting) front credits.

Right. I’m off downtown to watch Carnival of Monsters.


* As a sidebar, I was also very amused by the number of newspaper reviews etc that referred to the Doctor’s solution to the problem in the first episode as ‘typically incomprehensible’. One of the things I’m absolutely trusting Moffatt to do is iron out plot gaps and inconsistencies, the sort of stuff that regularly mars genre shows when they reckon they can get away with bollocks because it’s ‘only SF’. The Doctor’s solution to the problem in episode one may have been fantastical, but it couldn’t have made better sense or been explained more simply.
Posted by Dan Abnett at 5:28 pm 28 comments:

Ooooh! This is cool!

New stuff up on the Ultramarines movie site, where some of the actors talk about the performance capture process, plus the latest 'guest blog' from me about the production experience.

Remember to register at the site if you want to get this info as soon as it goes up.

On an entirely separate note, this is really cool too.

And kudos to my daughter Lily, who just landed her first proper acting role.

Now I'm off to drink tea and read the papers. Ooh! New Who tonight!
Posted by Dan Abnett at 11:12 am 5 comments: 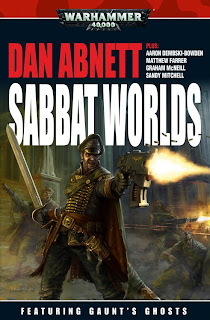 While he was out at Adepticon in Chicago, m'learned friend Aaron did an interview for the splendid 40K Radio (oh, the fake DJ slogans that name conjures up in my mind!). Aaron sent me a link to it, which I share with you here, in case (he said) I had half an hour to spare and I wanted to find out how much he loved me. Bromantically, obviously. My name comes up a couple of times.

Work continues apace on the Sabbat Worlds Anthology (at left). Let me tell you a bit about that. Because my schedule has been dinked a little by the sudden arrival of Captain Epilepsy and his fun-loving WarpStorm Commandos in the last six months, several projects have had to shift a little. Prospero Burns has been put back a bit, and that's affected Gaunt a tad. As a compensation, we've gone full steam ahead with a collection of stories set in the Sabbat Worlds, where the Gaunt books, Double Eagle and Titanicus all take place. An all-star team of writers, including Aaron, Sandy and Graham, have picked their own little corner of the Sabbat Worlds Crusade to write about. I've just finished work on a brand new Gaunt story for the collection, a veritable novella, called of their lives in the ruins of their cities. Graham's Apostles story (that's right, folks) is a total, total blast. Aaron's just posted a teaser of his on his blog (see link below), and if that doesn't make you put on your reinforced excitement trousers, I don't know what will.

While I've got your attention... in terms of my FAQ's, none are more FA than 'who do I send stories too when I've written them. Behold the answer: a link to Black Library's submission guidelines, plus details of their 2010 Submission Window. Let me, if I may, give you one piece of advice: follow the guidelines! Do not submit if you are not following the guidelines! They are clear and simple! There is no excuse for not following them!

It's your weekend, use it wisely

Nik and I are off celebrating our wedding anniversary today - we eloped on an Easter Saturday, so that's the date we always recognise, no matter where it falls. Anyway, that means I haven't got time to tell you how excited I am about my new Bluetooth mouse, or to discuss the 'new' kind of human being they found in a Siberian cave. Not today, anyway. But I'm sticking my head round the blog vault door long enough to point you in the direction of a nice new comics interview here, and to suggest that you visit Aaron's blog (find the link on the sidebar), there to watch the video from The Baseballs, which I think is quite brilliant.
Posted by Dan Abnett at 7:28 am 14 comments: