Anyway, he said some very nice things about Salvation's Reach, the most recent Gaunt book, and was very complimentary about the Navy action depicted in it. How much was researched, he wondered.

I do a LOT of research, for pretty much everything I write, which may sound faintly bonkers considering that what I write is Made Up Stuff. My contention, and I've stuck to it for over twenty years, is that SF and Fantasy work best when they feel authentic, when they seem grounded and real. So my basic approach is to consider each book as if it were a 'real world' or even historical novel. I find the closest thing in the real world to the fantastical thing I'm writing about, and research that, then convert laterally into the fantasy frame. So... writing about Kislevite Lancers (as I did in Riders of the Dead)? NO such thing in the real world, obviously, but how about 17th Century Polish Hussars?  Let's go! 40K air combat (Double Eagle)? Let's try the Battle of Britain and mix in a little Korean War and modern theatre jet warfare. TItans... and, indeed, Imperial Navy vessels and engagements (various, but especially Titanicus and Salvation's Reach)? Let's look at the British Navy, let's look at U boats and other submarine experiences. Let's visit Chatham Dockyard... ;)

Right now, I'm writing about court intrigue during the Horus Heresy, so I'm ransacking all the stuff I can find on the Tudor Court, the Vatican, Italian Principalities, Imperial Rome etc. etc.

But when the (goodness me!) half dozen Primarchs I'm handling here start duking it out through a city hand-to-hand, I don't know WHAT I'm going to start looking at. That may be when fiction starts looking at other fiction, and I start drawing on the thousands of superhero comics I've written over the last two decades...
Posted by Dan Abnett at 10:55 am 10 comments: 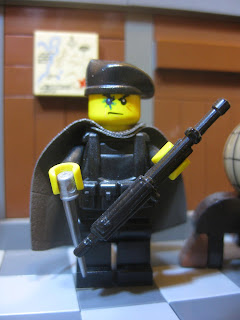 Yes. Yes, it is. It's Major Rawne. This isn't a dream, dear blog-post reader and Gaunt's Ghosts fan, it's an actual brilliant thing that has really happened somewhere in the world, and you're looking at it.

And if you think THAT'S as good as today is going to get, follow this link and see the rest. Yes, the rest! They're ALL there. Follow the link! Follow it now!

It's absolutely extraordinary. I have no words, to be honest. I am just too impressed. But I will say that TheMightyGoatMan on Reddit, whoever he is, is a very, very fine human being indeed.
Posted by Dan Abnett at 8:56 am 10 comments:

Sometimes, a letter arrives via the website that properly amuses me. Here's the latest one - thanks, Adam :)

I just wanted to let you know that I am sitting here at the pub with a pint of ale in one hand and "Brothers of the Snake" in the other. (1)

I am not quite certain, but I think it is the third or maybe the fourth time I read it. It is without the shadow of a blasphemous doubt my favourite book in the category "Shit Blowing Up", followed closely by "Titanicus".

I have lent both to my friends, and I will until the day I die remember one of them whooping and cheering as he read the sequence in which Sicarian Faero goes mano-a-mano with Nekromant Invidiosa in the Birdmarket. Just a few days ago, I let a librarian (2) friend read how brother-sergeant Priad engages the Dark Eldar in the treasury on Baal Solock. Afterwards, he just put the book down, nodded and said: "Slow motion writing. Respect."

I wanted to thank you for giving me hours of explosive entertainment. Whenever I feel the need for some dakka, I head over to the 'A' section of my bookshelf (3) and indulge myself. I expect to keep doing that for a long, long time to come.

So... thank you. Thank you very much. Keep it up, please.

All the best regards, from Malmo in Sweden,

(1) Actually, I had to put both down since writing on my phone is a two-handed job but I am sure you get my meaning.
(2) He is a librarian, not a librarian. The difference is small but important.
(3) Yes, you have your own section in my bookshelf.

(Note to self: Maybe I should put aside one copy of everything of mine that is published in the course of one year and offer it as a prize for a Christmas competition. Hmmm. Needs thoughts and comments from blog commenters...)

So, on the first day of January my postman brought to me... Fuck all, because it’s a bank holiday.

But on the first postal day of January, my postman brought to me... the comp copies of Dragon Frontier!

Now I have waxed lyrical about this already in a previous post, but the start of January saw the publication of my first junior novel, and my first novel for Puffin (an imprint that I have been reading since I was a kid). Check out the Dragon Frontier FaceBook page, and look out for news of a schools tour in the UK, and read the damned book! Dragons and cowboys! Cowboys and dragons! What’s not to love? Read it yourself or buy it for a child you love if you consider it to be outside your age-range/demographic. For very many reasons, this novel is close to my heart, and I hope that it is enjoyed by its intended audience and anyone else who wants to read it. SFX magazine gave it 4 stars in this review. Thank you SFX.

On the second postal day... I got my comp copies of the Embedded audiobook, which is unabridged and lovely. Regular readers of my blog will know how important Embedded is to me, and I simply want to applaud the work of the audiobook producers in bringing my so-non-audio novel to audio-ness. Kudos. If you want to know what I sound like as an author when I’m not writing for a franchise, when I’m writing ‘original fiction’ (like that’s a distinction that matters to me) then this is a good place to start. It’s also military science fiction, which is, apparently, what I’m famous for, so get in!

Then the third lovely delight of January was my advance copies of The New Deadwardians trade paperback, from those splendid people at DC Vertigo. The New Deadwardians was my first venture for Vertigo, and my first collaboration with the redoubtable INJ Culbard, and I have to say that it was a particularly satisfying experience. In a world saturated with zombie/and/or/vampire stories, I think we managed to find something different to say. I hope we’ll be able to say some more about this particular world in ‘season two’ if this trade sells well. So, may I suggest you buy it. It certainly had some gloriously good reviews, which is most gratifying. I really love that reviewers found it both clever and funny. Ian’s artwork is sublime. Publisher’s Weekly picked it as an honourable mention in it’s graphic novel list of the year (along with Kingdom: Call of the Wild, which I write for 2000AD, and which is drawn by Richard Elson, and is another strip I am very proud of). It is no exaggeration to say that The New Deadwardians, for reasons that are hard to explain, is one of the highlights of my career. I urge anybody who is interested in anything I do to read it.

If that wasn’t enough, January’s postman also delivered the latest issue of The Hypernaturals. This creator-owned, cosmic superhero team book, which I create with Andy Lanning, my partner in crime from the Marvel cosmic classics, has been receiving extremely good press. We are blessed with two tremendous artists and some fabulous cover artists, and the depth of the world-building, matched with the complexity of the plot, seems to have really found an audience. If you aren’t reading The Hypernaturals, which is published by Boom! then what the hell are you playing at? Go and get some back issues, or, if you’re really lazy, wait for the first trade, which will be coming your way, soon.

Talking of January, I’m not given to making New Year’s resolutions, and that’s not going to change any time soon, but I am going to make a small half-promise to myself, and to you. I’m going to make a huge effort to be back here with a new blog before the end of the month.