I'm trying to find a Slocum Lake. I think it's in the US, maybe Canada. You see, I got a fan letter forwarded by the Black Library. It was from "Kevin Skiera, c/o Miss Highsmith, Slocum Lake Road" ... and that was it. No state, no city, no zip, no country.

It was a great letter. Kevin is reading The Guns Of Tanith in his middle school reading class, and the assignment was to write to the author. I'd write back, if I had his address. Can anyone help with a suggestion? Kevin? Miss Highsmith? Anyone who knows Kevin or Miss Highsmith? At the very least, can you tell him from me thanks for the letter, I'm glad you liked the book.
Posted by Dan Abnett at 9:07 pm 8 comments:

What was that book you were telling us about?

Today's book had better be Magic For Beginners by Kelly Link, seeing as I was singing her praises just the other post. It's short stories, as was her previous book, Stranger Things Happen, and it's great. So great, it's won just about every award going. To call it fantasy is misleading, as it's so many things. It's funny, strange, surprising, observant, sexy, unlike anything else you've ever read and, most importantly, quite brilliantly written. You can tell I like it, can't you? Kelly doesn't need promotion from the likes of me - she's already the toast of the critics. But get it and read it and cheer yourself up. And check out her lovely website at www.kellylink.net.
Posted by Dan Abnett at 9:00 pm 1 comment:

What a lovely place Glasgow is, and what a lovely bunch of fans had gathered there for last weekend's Concussion. A splendid and inspirational time was had by me and my Confederates, Marc Gascoigne and George Mann, the men from BL and the recently announced Solaris. My, how we laughed! My, how we evolved jokes and euphemisms that are sadly not in any way fit or legal for public consumption. Awesome line up of people to meet and listen to, but highlights would include the whole Con sitting down to (enthusiastically)watch the new Who live on a big screen, Kelly Link winning a BSFA award (pay attention to this blog for any length of time and you'll discover I love Ms Link's work. In fact, I might put up a link to Link), and discovering what a good sort Stephen Baxter is.

Smofs (that's Secret Masters Of Fandom to the rest of us), I salute you!
Posted by Dan Abnett at 8:17 pm 1 comment: 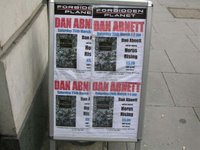 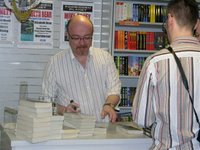 So... anybody out there going to be at Concussion in Glasgow this weekend? Just wondering.
Posted by Dan Abnett at 12:03 pm 8 comments:

I've just finished the tenth Gaunt book - The Armour of Contempt - in time to attend Games Day in Paris. That was a fantastic event, the tenth year of French games days, and I had a great day meeting readers of both the English editions and the French translations. I'd like thank everyone who came along, and especially express my thanks to the Gaunt translator Julien, and my host at the Bibliotheque Interdite, Mathieu Saintout, for looking after me and my family. We had a great time and would return without hesitation, any time we were invited. Que brule la galaxie!

Now Gaunt's gaunted again for the while, my time will be taken up with writing the next Ravenor novel. It's called Ravenor Rogue, since you asked. In another thread, Damian asked if Ravenor was going to be a self contained trilogy like Eisenhorn, or an ongoing series. I want it to be be an ongoing, so I'm imagining more than three at this stage. Certainly this third novel will end the first main arc, but it's not the over all end. I'd love it if the 'cases' all lasted for different lengths - one for two or three novels, another over in one self-contained hit and so on. We'll have to see. We'll have to see what you think, too.
Posted by Dan Abnett at 11:39 am 16 comments: