Get Your Demon Grinning

This Sunday, May 1st, my local comic store in Maidstone, the Grinning Demon, is staging its first small-but-perfectly-formed Con of comics and gaming and all things fun. Scroll down to see the poster image I ran a couple of posts back, or click here to see the Demoncon image.

Naturally, I aim to support my local comic store, so I'm going to be there in the morning between about 11 and Midday, and then I'll be back again after lunch with the other half of DnA, Mr Andy Lanning. Expect us both from around about 2 for a couple of hours. Andy may bring some artwork. I may bring some freebies. We'll sign stuff and chat. As you can see from the poster, there are plenty of other, much better reasons for attending.

It promises to be a great event, so come along and spend your May Day, demon-style!
Posted by Dan Abnett at 7:53 pm 8 comments:

If you're going to be at Eastercon this coming (Easter) weekend, in Birmingham, then you can catch me – along with many of Angry Robot's finest – there. Known as Illustrious, this is the 62nd National Science Fiction Eastercon, and you can find out more about it here.

I'm going to be there on Friday and Saturday, and I believe the mighty James Swallow will be attending over the weekend too. This year, the theme is military SF, so it seemed like an ideal time to officially launch the UK paperback edition of "Embedded". I'll be doing a reading, and then joining with the other Angry Robots – including Lauren Beukes, Lavie Tidhar, Aliette de Bodard, John Meaney, Colin Harvey and Andy Remic – in a mass AR signing/robotfest at 4.00pm.

If you're not actually attending the Con, you can nevertheless catch all of us between 12.30 and 2.00 that same day at Waterstones, Birmingham High Street. You can find the official details of these events at the Angry Robot site here.

For those of you at Illustrious, there's also the NewCon Press event on Friday afternoon at 4.30pm. This is to launch their latest anthology – Further Conflicts – which I've contributed a story to. This is a collection of all-new military SF and I'm in some pretty – pardon the pun – Illustrious – company. The book is an exclusive, limited edition signed by all the authors. Details here.
Posted by Dan Abnett at 2:44 pm 8 comments:

Your Prose Is My Crack

...or how I went to Adepticon and lived.

So I went to Lombard, which is in Chicagoland, and attended Adepticon. Adepticon is the Iron Man endurance version of Games Day. I was left feeling nothing but slack-jawed respect for the players and the organisers. In all seriousness, the sheer, determined fortitude on display was alarming. For three straight days, the crowd got up at silly o’clock in the morning, played their asses off, and went to bed at half past insane (if they went to bed at all). In the meantime, they came to get things signed, to talk, and to listen to two guys in suits yack on about being writists. Oh, and to give Forge World a gazillionty eleven thousandish bucks. True story.

Yes, Mr Nathan Long and I did suit up for our seminars. Both of them. This was due to a conversation we’d had in Baltimore last year which had gone something like this:

Nathan: Dude, we should do a signing like this totally wearing suits!

I paraphrase a little. Anyway, so we did. Twice. And once in swimwear. Okay, not the last bit. 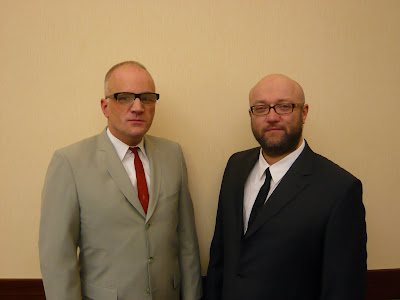 "It's 106 light years to Chicago, we've got a full tank of prometheum, half a pack of lho-sticks, it's grim dark and we're wearing blast visors. Hit it!"

(alt. caption courtesy Matthew Farrer: "The tall one wants white bread, toasted, dry, nothin' on it. And the English one wants four whole fried grox and an amasec!")

An awesome show, anyway, and my thanks to Hank and the team for having us; Super Dooper Rik Cooper and Vince Rospond for handling us; Dave “silly heretic” Ploss for being such a stalwart pilgrim; all the podcasters and crews that interviewed us (I’ll post up links as they come to me, but here’s the first from the Eternal Warriors crew, and one from Dave); all the great guys at Geek Nation Tours; the Forge World crew of Kenton, Steve and Jon; and you. Yes, you. All of you who came and chatted and asked questions. There were way too many friendly faces for me to be able to name check here, because I’ll end up forgetting someone and feeling bad about it, but you know who you are. If you shook my hand, or gave me a painted Iron Snake, or a purity seal, or a badge, or a ten Euro note, or a copy of your comic (stand up Dave Pauwels), or brought enthusiasm, friendship or a great idea (Bruce and Michelle Euans, I’m looking at you) or any of a thousand other things, thanks. Thank you. The game-play mindset of Adepticon was extra intense, so the questions and engagement levels were too. It was amazing, and entirely filled past the fill to here line with purest win.

And someone told me “Your prose is my crack”, which was nice. And could have been worse. It could have been the other way around. Also, check out Dave’s link above to see someone swear I'm better than Dickens.

I would also like to celebrate the motto supplied by Commissar Mel of Dicehead, who announced that “In battle, you don’t always get a clean fork.” That's just one of life's great truths, along with ADB's "Prose before hoes".

Ah yes, ADB. I’d wanted to go to Adepticon ever since Aaron Dembski-Bowden (who went last year) told me “man, it was the best weekend of my life!”. Again, I paraphrase. He was more emphatic. For his sake, I trust that the estimation will be revised following his forthcoming nuptials though, to be fair, that will be a Tuesday. However, once I’d been HI DAN ABNETTed whilst at the urinals five minutes into the show, my warm feeling towards ADB ebbed slightly. I got HI DAN ABNETTed a lot. At the end of the show, I even got BYE DAN ABNETTed.

Anyway, this is sunny Lombard, gateway to the West. 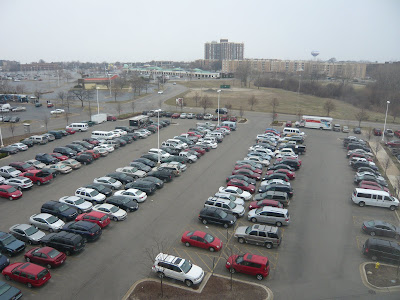 It is important to remember there are no sidewalks in Lombard. Or, you know, Chicago. So on no account ever try to walk anywhere, like me, Steve and Kenton did. Unless you want to get tasered, shot, or complete the I-Spy book of People In Cars Who Do Not Want To Make Eye-Contact With The Three Weird Fucking Guys On The Roadside. 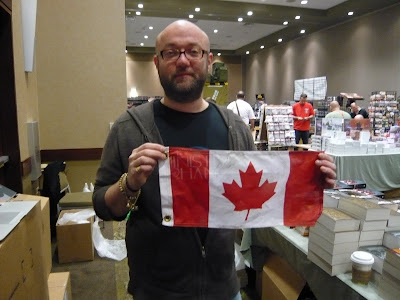 This was one of the more amazing things: a gift from the crew of a Canadian Leopard tank somewhere in Afghanistan (still covered in Afghan dust). The crew physically divides copies of my books so they can all read them at once, like a relay. This was presented to me at the Geek Nation dinner, and in front of actual people, which made it extra hard not to well up at their sheer awesomeness. 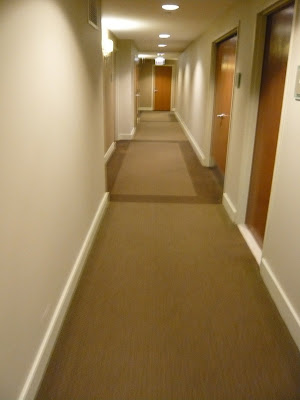 There were actually more people around than this photo suggests. 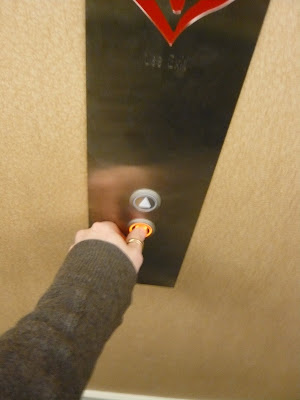 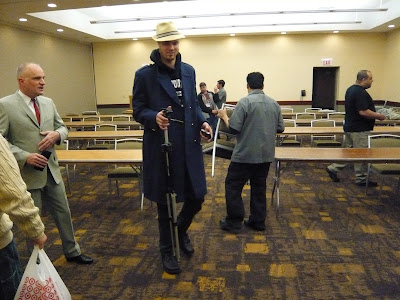 On the left, a normal-size Nathan Long. On the right, the extended remix Dave Ploss. Tall, is what I'm saying. 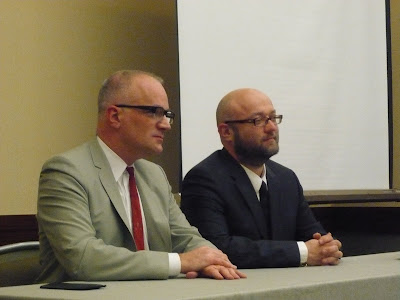 And here's Nathan with the weather. 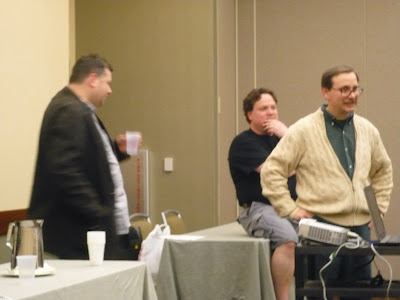 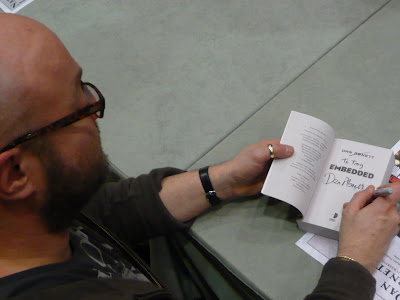 Another moment of awesome sauce. A photographic record of the first copy of Embedded I have ever signed (avert your gaze, BL). 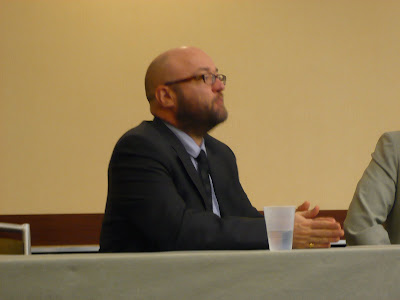 The candidate's debate was televised nationally for the first time. 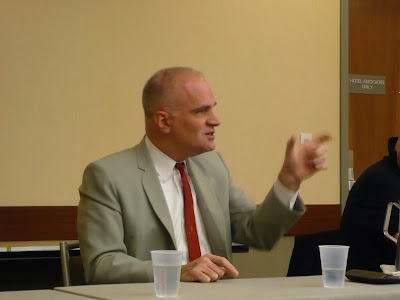 Nathan Long: tough on questions and tough on the causes of questions. 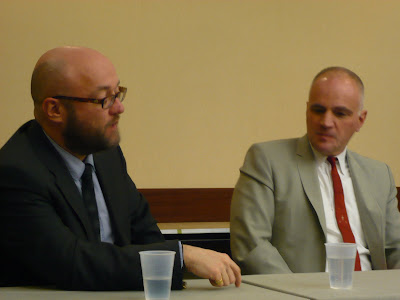 The pitch meeting with Sterling Cooper Draper Pryce was going well. It was just about then that Nathan realised Dan had forgotten his pants. 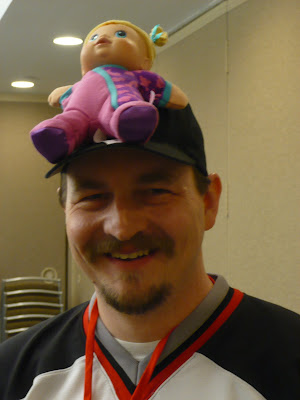 This is what happens directly after you explain your "Chaos Culture And Stapling Babies To Your Hat" Theory. 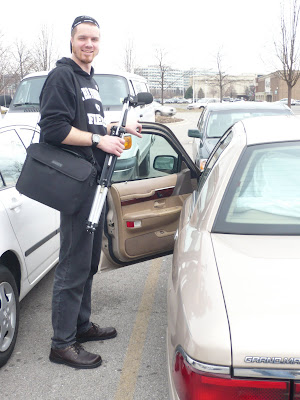 Finally, it was time to go, but not before Dave had shown us the napcave (ie the car he had been sleeping in during the Con weekend). I told you Adepticon was hardcore. By the way, Dave is really tall and does a fine John Wayne impersonation. We invented a new game, which was to think of the least likely film roles that ought to have gone to John Wayne, and then get Dave to perform a line or two (highlights: John Wayne as Obi Wan, John Wayne as Rick Deckard, John Wayne as Ferris Bueller, John Wayne in Casablanca... in the Ingrid Bergman role). To understand how tall Dave is, bear in mind those are giant cars, and he's holding the Eiffel Tower.

On my way out through O'Hare, I was browsing in the gift shop. On one rack of general interest books, The Bible's Good Words For Every Day and The Lord's Promises For You had been placed next to Laugh Out Loud Jokes, which can't have been the intention of either publisher.

Anyway, good times. I hope to be invited back. A final observation: at the airport foodcourt, I was greeted with the words "Chicago tastes of the World". Hmm. Don't expect me to lick it, then.


Before I forget, a reminder that the rescheduled Embedded Forbidden Planet Exclusive Edition signing is this Thursday at 6pm. Here's the Guardian's review to help persuade you to read it.
Posted by Dan Abnett at 7:50 pm 24 comments: