A lot of people have been asking me about my new book "Dragon Frontier", so let me answer some of the most pressing questions: 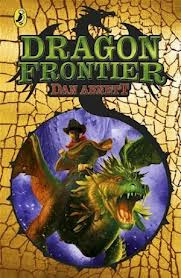 What is the title of your next book?
“Dragon Frontier”.

Where did the idea come from for the book?
Andy Lanning and I work on ideas together for comic books for the American comics market, and this was one of the ideas that we tossed around. When Puffin suggested that I wrote it as a children’s book, it really began to come together.

What genre does your book fall under?
This is very definitely a children’s book, but I hope that parents and carers reading it to children will enjoy it too.

What actors would you choose to play the parts of your characters in a movie rendition?
I love casting the characters in my books and imagining the stories being played out on the big screen. This story is set in the American Wild West frontier, and should include lots of young, unknown talent, so I think a big open casting session would be the order of the day. The other key thing would be to employ some of the greatest CGI animators in the World to recreate the scenes with the other main characters in the novel, the dragons!

What is the one sentence synopsis of your book?
Jake Polson and his family are starting a new life on the American Frontier. Twelve-year-old Jake is proud to drive the lead wagon; he's in charge of the oxen and minding his Ma and little sister. But tragedy strikes and Jake must venture deep into the West in search of a legendary creature to save his family. What he discovers in that vast landscape is wilder than he ever imagined. Out on the frontier, an evil force is waiting . . . According to the blurb.

Will your book be self-published or represented by an agency?
“Dragon Frontier” is published by Puffin and will be available to buy on January 3rd 2013.

How long did it take you to write the first draft of the manuscript?
This book was very special, because, after writing more than forty novels, it was my first especially written for children. In the end it all happened very fast, and the first draft was probably completed in less than three months.

Who or what inspired you to write this book?
I was a keen reader as a child, and I loved reading to my own children, so it was only ever a matter of time before I would write a book for children. I think I’ve always been inspired by the memory of the excitement that a really good book can give you as a child, by the idea that going to bed is fun, because you get to read the next chapter of your favourite book. And, of course, I’ve been inspired by every great writer for children that it has been my pleasure and privilege to read, from Alan Garner to Arthur Ransome, from Paul Biegel to Susan Cooper, from...

What else about your book might pique the reader’s interest?
What could be more interesting than dragons? Or cowboys? Or dragons? No, cowboys! No, dragons!