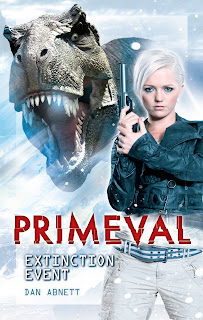 So how about that for a cover? Did I ever, in all my born years, expect to write a book that had a posed picture of a member of S Club 7 on the front of it? And like it? I’m pleased with the way the Primeval novel has turned out, so I hope you get a kick out of it too, even if you don’t watch Primeval. There are dinosaurs a-go-go, and when I say dinosaurs, I mean proper dinosaurs in large numbers. There’s also plenty of Russian military hardware, and Cutter, Connor, Abby and the rest. I’m especially proud of the dinosaurs, though. I think I give good therapod. In January, when it’s published to tie into the start of the third season on TV, you can judge for yourselves.

Last weekend, I tripped up to Colchester to attend the 16th birthday celebrations of the Colchester GW store. A very fun time I had, and I would like to thank Bunny and all her crew for making me feel so welcome. Hello to the 4TK guys as well.

Next weekend, the 14th and 15th, I will be attending the ingeniously titled Abertoir, the Aberystwyth Arts Centre Horror Film Festival. I’ll be signing on the Friday evening and then, again, on the Saturday lunchtime. I’m not sure why I’ve been invited to a horror film festival, unless it’s because I wrote a “Texas Chainsaw Massacre” graphic novel. But I’ll be there, willing and able, and if you’re there too, it’ll be fun. Check the Abertoir site for details.

Also just out from the pen of yours truly is “The Forever Trap”, a Doctor Who audio adventure I wrote earlier this year, which has been read on CD by Catherine Tate. She does great voices, and I’m completely chuffed with the end product.

I would also like to alert you to the publication of the trade paperback compilation of my “Kingdom” strip for 2000AD. It collects both of the series that I wrote, drawn by Richard Elson in spectacular fashion. “Kingdom” is nothing like as well known as Nova or Gaunt, say, but the people I’ve given my spare copies to have loved it, and it’s Nik’s favourite comic strip. If you like my novels, you might want to track it down on Amazon, or similar purveyor of published material.

Xhalax - Yes, I do think you have lost your mind to the dark elves. You should know that Shaun has provided Nik with enormous creative fodder. And when it says “Dan Abnett added you as a friend on Facebook” it’s probably referring to the fan Facebook site rather than the real Facebook me. However, if you do join Facebook, I will happily add you as a friend. Does that make you feel less wibbly wobbly?
Posted by Dan Abnett at 12:33 pm 122 comments: