No time to explain! You just need to know that the second of the fresh batch of video-blogs is now up and ready to view!

What are you waiting for? 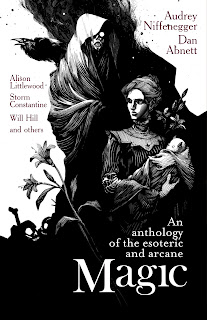 That's right, Magic, ladies and gentlemen! It's a new anthology of original fiction from Solaris, and I've got a story in it (among some illustrious company).  But don't just take my word for it... or rather DO, because that blather segues rather neatly into this link, which will take you to the first of my new batch of recently recorded video-blogs, answering your latest round of questions. Many more chunks to come, but this one starts the ball rolling with a chat about Magic, and other forthcoming projects.

Thanks for all the questions, by the way. They were great and various and very probing. You should all be interrogators for the Holy Ordos.  I'll be posting up new vlog segments every few days, so stay tuned.
Posted by Dan Abnett at 8:19 am 4 comments:

Email ThisBlogThis!Share to TwitterShare to FacebookShare to Pinterest
Labels: Dan Abnett, Magic An Anthology of the Esoteric and Arcane, questions, video blogs

I thought many people would like to see this. The wonderful audio book version of Embedded produced by the splendid people at Brilliance. End of September release date, as I understand it.

Second of all... I'm going to be doing some more video blogging, so I need questions to answer... or at least to use as prompts from which to ramble indiscriminately for half a fething hour until I remember the point of what I was saying.

Please send them in. ASAP!*

Look! It's him! We thought he was never coming back!

"Where have you been?" they all asked.

"Why haven't you blogged for SO long, even by your immensely lackadaisical not-to-mention actually crappy standards of keeping a blog going?" they asked, in addition. "Have you been sick? Missing in action? Lovelorn? Off on a path of self-discovery and spiritual enlightenment? Lost down the back of the sofa?"

Not only have I been too busy to blog properly, I also haven't been able to talk about some of the exciting things that have been keeping me so busy. Three or four (or five) of them, actually. That will change soon. Announcements of unrivalled sexy-ness are coming. Until then, you must walk the line and stay patient, just a little while longer.

But never let it be said I don't give you stuff. The first of the new season's big excitements is here... in advanced form, at least. I invite you to...  look at this

Nice, huh? I'll blog about it soon to whet your appetite. May I also take this moment to direct you to The Hypernaturals (from Boom!) and The New Deadwardians (from Vertigo) which are both getting rave reviews from all quarters.

And it may be as busy as Piccadilly Circus during the Olympics Opening Ceremony on the work front, but here at least are a few places you're going to be able to find me over the next few months. If you want to, that is.

The 2000AD signing is going to be a blast, and we hope to see you at one of the nationwide signings... and the BL events are going to be HUGE, so try not to miss both of them.

Right. Back to work. I won't go missing in action for quite so long this time, I promise.
Posted by Dan Abnett at 6:17 pm 12 comments: