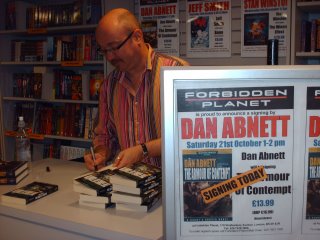 Well, no, not actually. I just finished my Big Secret Project - you know, you know, the one I’m not allowed to blog about yet. Sheesh! Everyone knows about it by now, but due to a fancy nondisclosure, I can’t breathe a word about it. How frustrating is that? To spend a month and a half finishing something, and find that, still, it’s a secret?
Never mind. Take a look at Amazon. You’ll find it there. I didn’t tell you to look at Amazon, did I? Me, I’m saying nothing.
Anyway, my B.S.P was a lot of fun. The deadline was last Thursday, my birthday. Also the day after my youngest’s birthday, and the same day as my parent-in-laws’ Golden Wedding anniversary dinner. As a result, my birthday got postponed. Big Day. The dinner was lovely, and the deadline was met.
So what now, I hear you cry? I spent the day today with the fine folks at Games Workshop, and tightened up the next few months of schedule. My next project is Gaunt #11 - “Only In Death”. Gosh, doesn’t that sound like the last in the series? It’s the last in “The Lost” arc, that’s all I’m saying. A certain, prolonged ‘rest period’ might follow, where I turn to other things like Heresy books and, oh, I dunno...
“Yes, Dan, but is it true that Ibram dies in ’Only In Death’?” I hear you quake. Well, I couldn’t possibly comment. But I am, as we know, an equal-fatalities employer.
Texas Chainsaw’s turning out to be a really rewarding job. Who’d have thought that so much horror would be so much fun? The Cal Hamilton/Malone stuff also kicked off, and now Sinister Dexter - or at least surviving partner Sinister, is back in 2000AD, taking names and kicking arse. I urge you to prog-up and read “Places To Go, People to Do,” a six parter that leads into “Pros and Cons”. Nothing will ever be the same again.
May I also urge you in the direction of my good friend Ian Edginton’s Dark Horse series Scarlet Traces. It’d be fab even if it wasn’t drawn by the peerless D’Israeli. It’s so good, I could choke. Way too much talent, them two. Ian and I have been partners in crime again recently - check out what Boom! comics is about to send your way.
What else? Oh, yeah. I’ll blog about The Joe Haldeman Revelation next time. Also, next time, I’ll wax lyrical about Something For Kate. And other stuff, like... something.
The Armour Of Contempt is now out. See you at Forbidden Planet this Saturday at 1 PM, or at GW Plaza Oxford Street the Saturday after. Or The Gamer’s Guild in Redhill next Thursday at 2 PM. Come on, you gotta be able to make one of those.
Over the table at my parent-in-laws’ Golden Wedding anniversary dinner, my sister in law Zoe whispered to me a joke about a tattooist and a woman. It was the funniest thing I’ve heard in ages, but sadly too vulgar to post here. Or say out loud at a Golden Wedding anniversary dinner. Thanks, Zoe.
I’d like to take the opportunity to blog here a happy birthday to my daughter Lily (for last week), my daughter Jess (for next week) and my mum (also next week).
I’m off to play with my Sabbatier filleting knife - people should be careful what they give you as birthday presents, shouldn’t they?
Posted by Dan Abnett at 12:04 pm 11 comments: