For some reason, my blogging muscles aren’t yet up to strength after the Christmas lull, so I apologise about that. I’ve been meaning to post rather more frequently, but... meh.

Any road up, this is just an interim “I must post this info” post, a public information service if you will. This weekend it’s the New York Comic Convention, which I was due to attend with my comic (cosmic?) writing partner Mr Lanning. Long story short, we’re not going to make it after all. We’re deep into War Of Kings at the moment, and we can’t really leave the white heat of the writing lab, not even for a larky jaunt to NY. A long weekend of conventioneering would put too big a hole in our delivery schedule. Sorry about that, just wanted to let you know in case you were thinking of looking for us there. Maybe next time (Andy and I are both pretty peeved we’re going to miss the fun).

Highway asked how Andy and I write together. Well, Highway, the famed DnA writing team finds it best to write alternate words using different coloured crayons. Seriously, the truth is, we sit facing one another and type on back-to-back typewriters, and then riffle-shuffle the pages together to make a script. No, no, we strike each other repeatedly with dictionaries like two manic contestants from It’s A Knockout until random words are shaken loose, then we sweep them up, feed them through a meat grinder, and expertly form the resulting mince into script sausages which–

All right, all right. We get together once or twice a week and brainstorm. These brainstorms, which involve sometimes literally throwing ideas at each other in a locked room, result in beat sheets and outlines which, once they’re approved editorially, I take away and turn into full scripts, while Andy returns to his ‘other’ job as a world-renowned comic book inker.

We’ve been doing it for twenty years and we find it works because, well, it’s fun. How many things can you say that about?

I’d like to thank Satan for the musical tips (not THE Satan, obviously), and advise his wife that the third (and final) Inquisitor trilogy will begin as soon as I can get to it. I‘m as anxious to see how it all ends as you are (clue: it’s not going to be pretty).

Roderick - a rhyming sword, historically, is one of a matching pair of ceremonial or ornamental weapons that had (because they were a set) the halves of a rhyming couplet etched onto each blade. In Ravenor, the idea is a little more mystical and esoteric. So esoteric, in fact, I can’t remember it exactly right now. But that’s the REAL definition.

Information will follow shortly about the rumoured Scottish tour, as well as other events that I or one of my clones are going to be popping up at. I’d like to take this opportunity to become wildly enthusiastic about my recent trip to Paris, which was fantastic. Thanks to every one who came to the three events, to the shop crews, and, of course, to fine people of the Bibliotheque Interdite, especially Mathieu and Dju. It was great to see everyone. Behold, below, some lovely snaps of the weekend, many of which reveal the fun times had by all. 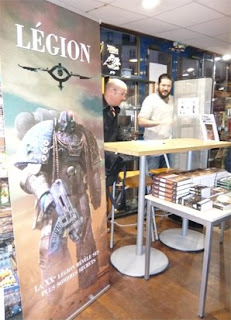 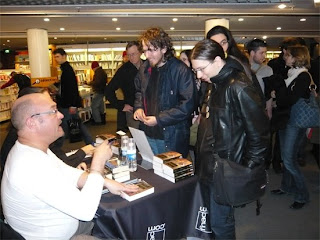 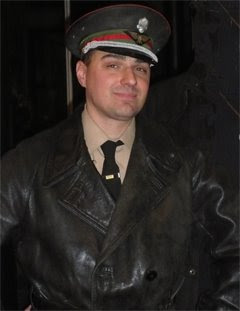 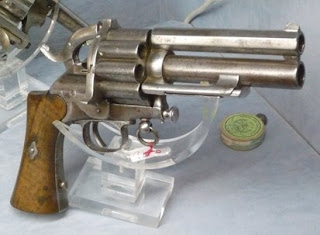 Anyway, must close. A final word regarding Mr Dave Taylor, whose blog I hereby propel you headlong towards. Dave is a veteran GWer, and was (I’m sure) the first person I ever came across who’d built a Ghost army. Now he’s onto a Blood Pact army, which I’m sure will interest many of you. Take a look at http://davetaylorminiatures.blogspot.com/. It also helps that Dave is a very fine fellow indeed.

More news, and Hussar-esque activities soon. Enjoy the snow.
Posted by Dan Abnett at 9:58 am 63 comments: