Paris in the meantime...

And so to Paris by Eurostar for Games Day France 2011. 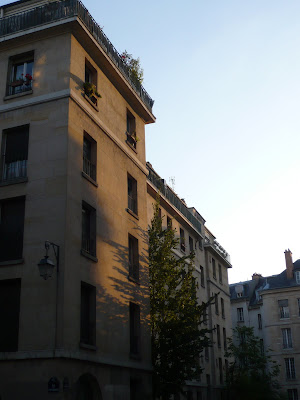 Ah, Paris. We'll always have you.

Armed only with a stout pair of walking legs, I covered a fair bit of ground in the free time available before the event itself began. I was keen to get a few snaps that I could post here, because I have, I'm painfully aware, been somewhat twap in the blogatory department of late. We can lay the blame squarely at the door of Salvation's Reach (Gaunt #13), which I'm working very hard to finish. It's a corker, I'm telling you. A fething corker. As promised, I will post a taster extract soon.

So, in a hasty tea-break between the final bombshell chapters, here's a quick overview of the GD France weekend. 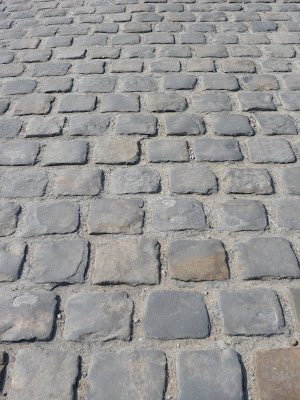 (nb: in common with the picture above, my blog regularly involves a significant quantity of professional cobblers)

Paris is, of course, full of very familiar sights. 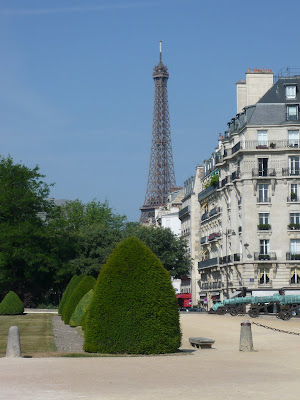 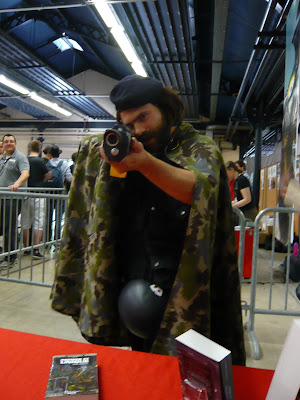 On Saturday, due to the crowds of people trying to get into them, we skipped the Catacombs and headed straight for the Les Invalides and the army museum. A side note, but you'd have thought that the alleged day of the Rapture would have been the one time everybody would be trying to get out of the Catacombs. Alors. 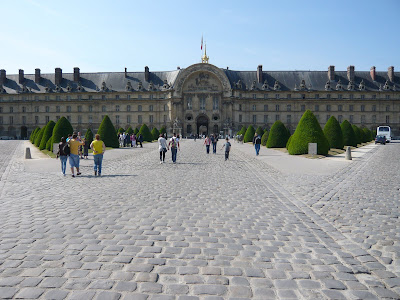 Les Invalides is pretty spiffy. There's a whole Palace of Terra riff going on, both outside... 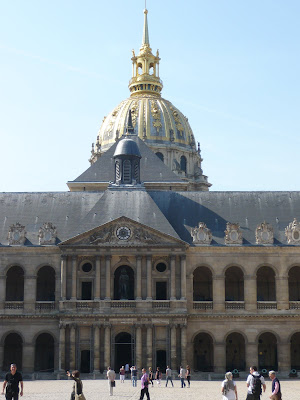 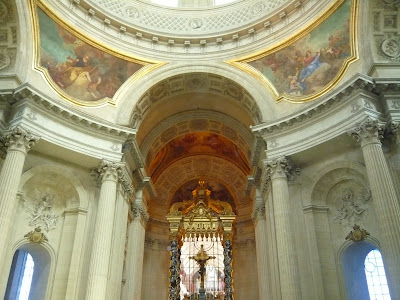 Along with the museum - a fabulous collection of militaria - we visited Napoleon's Tomb. The sheer mind-futzing irony of being here in the company of a man who is known to all and sundry as "Boney" is not immediately evident from this photo, I grant you. Trust me on this. There was more irony going on than in the whole of President Reagan's autobiography. 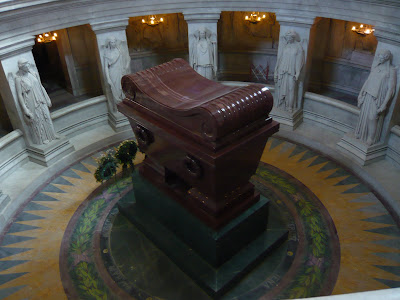 Lots and lots of cool stuff in the museum, including plenty of things that were very 40K. Notes were made. Ideas fermented. The unnecessary and malevolent deaths of favourite characters were planned. Don't you just love the rampart guns in the first pic here? 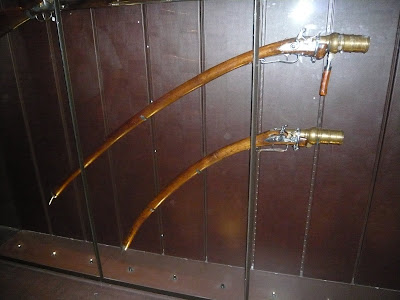 Of course, when processing inspiration like this, you always have to think "is it canon"? 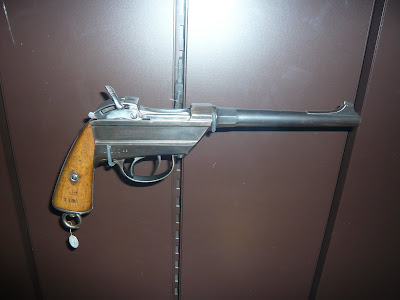 And you know what? It was. 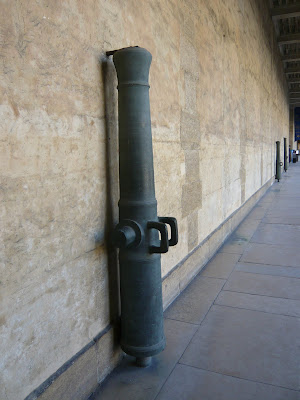 Anyway, Games Day France. At the start of the day, the French GW staff got themselves suitably psyched up for the show with the Gallic equivalent of a hakka. Une, deux, t--WAAAAGGHHH! 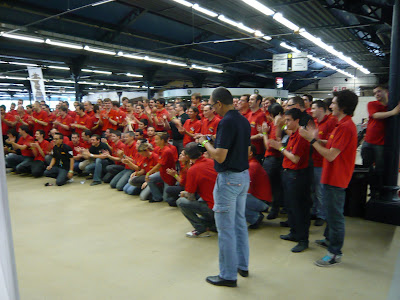 Not to be outdone, the Black Librarians got pretty revved up and out of hand too. I was pleased to see, however, that France was clearly expecting me. 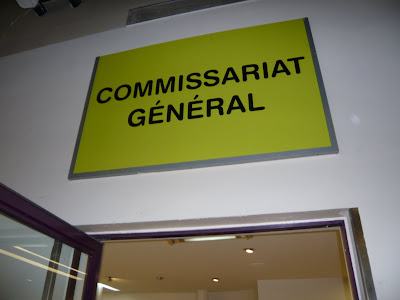 There were some great costumes around: take a collective bow, the fair ladies of Atomic Bamboo. 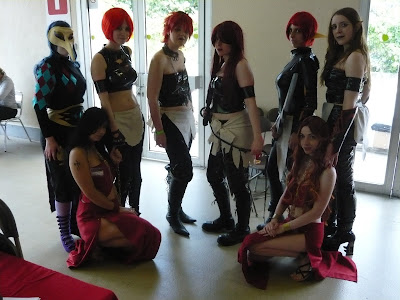 There was also some less successful cosplay. Here, we attempt a rustic recreation of the painting American Gothic. 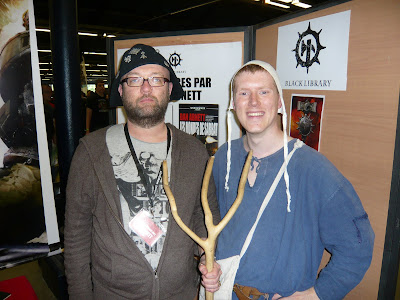 The place was certainly heaving all day. BL did good business. In fact, Forge World and BL got cleaned out like they'd been hit by locusts. 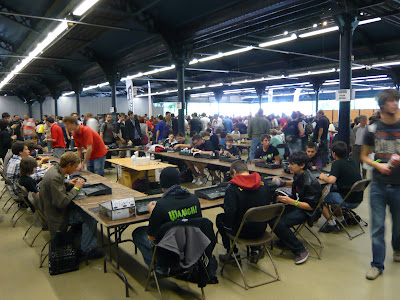 Back to Corbec. He won the costume prize, you know. A great effort. 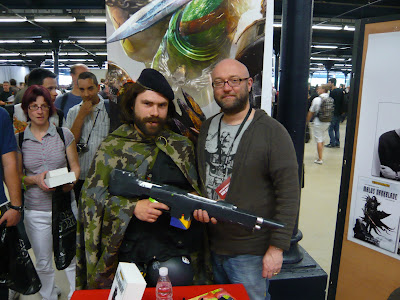 Distracting him by mentioning which Ghosts were going to bite it in the next book, I managed to wrest his straight silver off him for a moment. 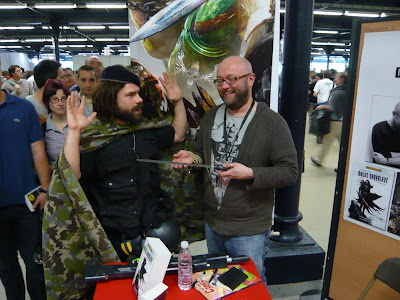 He didn't take too kindly to that. 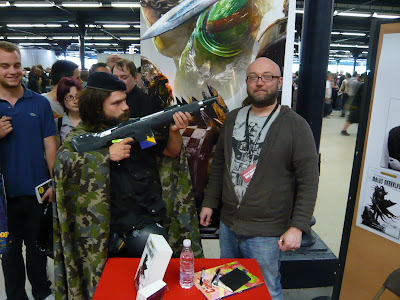 I tried to post comments on and off through the afternoon whenever I could, until I started to put the 'a' into Twitter. Then it was time for a rest and breath of fresh air in the Parc Floral. 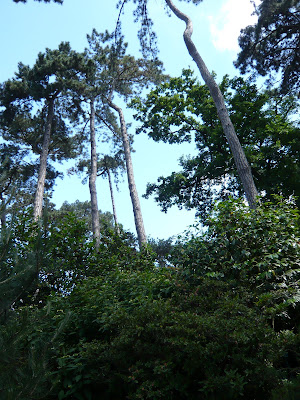 It was a weekend of contrasts. For example, a cape in the museum on Saturday, worthy of a God-Emperor... 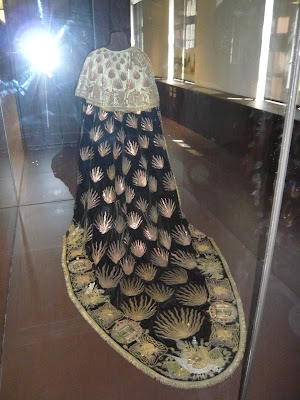 ...and a rather more functional but no less heroic one on Sunday. 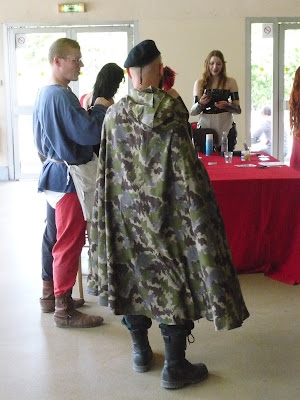 Anyway, I had a splendid time. I want to thank everybody involved for making me so welcome, especially the staff of GW France, and BL's Boney, Lindsey, George, Anthony and Julien.

Tourists often complain they visit somewhere and all they come home with is a lousy tee-shirt. I bet this guy wishes he had. 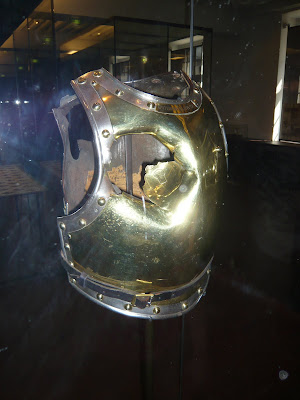 Thanks for coming and queuing, folks! See you next year! 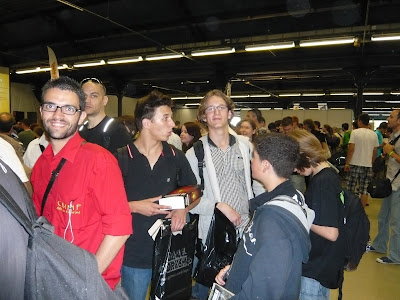 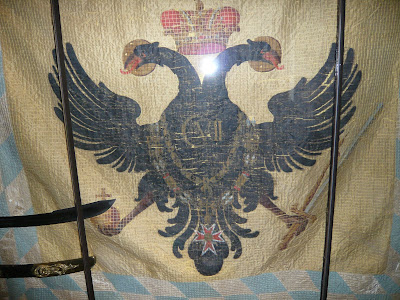