The day began with some nice, informal seminar-type-things, where we sat and chatted with the first folks to fill the available seats. Good fun, with a very engaged and enthusiastic response. Here you see one of my groups trying to figure out how I made the guy in the front row vanish without leaving my chair. 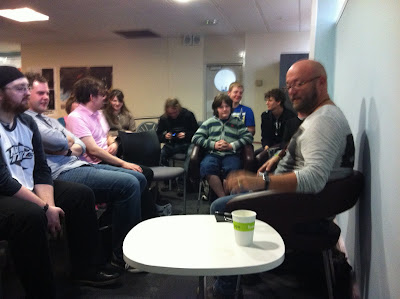 Behold, the assembled writist might of Black Library and friends! Across the back row from left: Chris Wraight, Ben Cawkwell, Graham McNeill, Bill King, some clone dude, Jim Swallow and Neil Roberts. Front row from left: Sandy Mitchell, Sarah Cawkwell, and a child version of Jim Swallow sent back from the future to save humanity. Or something (actually, it's Small Son. Hi, Small Son!). 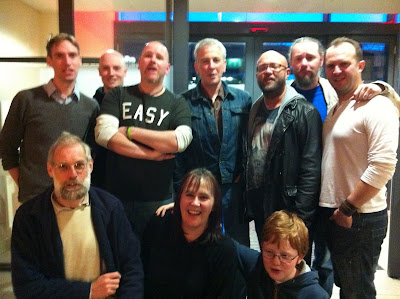 And here are some other friendly and familiar faces being enthusiastic! And daemonic! 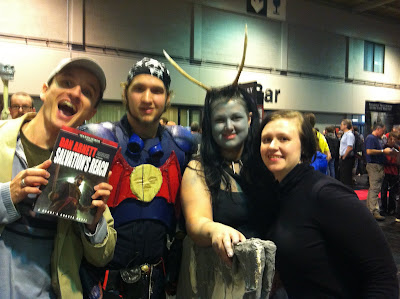 Just wanted to publically thank GW staffers Claudia Cole and Jenny Northeast who, with Chris Bone, so brilliantly steered, managed and otherwise looked after me and my queue all day long. Thank you so much! 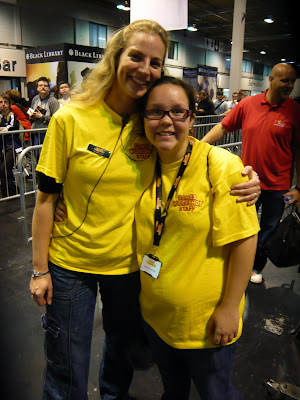 So tell me, Mr Abnett. how does it feel to be the older, less-hip version of Aaron Dembski-Bowden? Well, having stolen his shades, I can tell you... it feels like this: 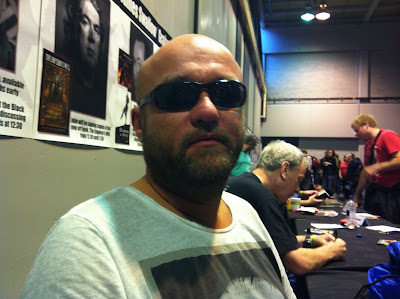 I'll be back soon with a special competition - won't that be fun?
In the meantime, I just wanted to remind folks in the USA, espescially New York, that I'll be attending the New York ComicCon this week, and also doing a special signing at games Workshop in Greenwich village. To bring the details up to date, let me recap:
Games Workshop Greenwich Village is where you will be able to find me and Jim Swallow next Saturday afternoon (the 15th) between 1 and 3.
As for the New York Comic Con itself, I'll be signing at the DC booth with Andy on Friday between 1 and 2, and Saturday between 11 and 12. Then we'll be signing at the Marvel booth (#654) on Sunday between 2 and 3, and then participating in the X-Men: Regenesis panel in room 1A10 between 3.30and 4.30. You will also be able to find Andy and me during the Con in Artist Alley, where we will be sharing a table with the estimable Mr Todd Nauck and running a flamable dwarf juggling workshop (one of these facts is, yet again, a lie - can you spot which?). I'm told our table number is M20, and that still seems to be the case at time of going to press.
See you there!
Posted by Dan Abnett at 11:26 am

Zingaroo,too bad your NYC trip was'nt for this weekend we had temps in the 80's.
Next Saturady will probally be 45 knowing our crazy weather

Will you be in Artist's Alley on Thursday?

And I would like to add that the inane grin on my face in that pic only got bigger as I read Salvations Reach, before turning upside down as I finished it and realised I would now have to wait a whole YEAR at least for MORE GG goodness.

Then it became a smile again as I realised I could get the audiobook version and enjoy it all over again :)

Crazy fun that day was!

I spent quite a bit of time talking to Claudia while waiting....she's awesome.

And I look awful in that picture.

I totally lost those sunglasses.

Now I know why.

Still, it wouldn't be GDUK if I didn't lose something.

Some very 'Varl' glare-shades there! Maybe if you painted your face grey and smeared wode into your beard you could pull-off an Abhnett ap Niht costume?