... Fenris. It's snowed all day. Very festive, unless you're out in it. I've spent the afternoon sitting under the tree signing a consignment of Prospero Burns that will be despatched to the four corners of the kingdom. I'm very excited that PB is out there at last, and I'm delighted by the great notices it's getting. I'm also delighted that Ultramarines is shipping, and the response is terrific. I'm also chuffed to pieces by this (thanks, IGN readers!), and by this announcement.

It's been quite a week, all round. Quite a year. I've now finished Embedded, and it's something I've very proud of. I'm knee deep in Salvation's Reach, the next Gaunt (though I'm pausing for a few days to write a cock-spankingly great*, Mournival-oriented Horus Heresy short story). Heroes for Hire and The Annihilators are keeping my comic hand in, as are Kingdom and Sinister Dexter for 2000AD, and Insurrection for the Megazine.

And now it's a busy final week, with the last few pre-Christmas deadlines to hit, and the last bits of preparation to do (on top of Christmas, it's my father-in-law's birthday, and then Nik's on Christmas Eve).

Anyway, the girls went out and got a tree... 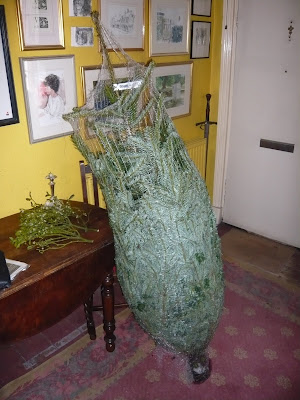 Naturally, putting up the tree and decorations required some considerable 'help' from Pilgrim. The boxes to the right are the consignment of PB I mentioned earlier. 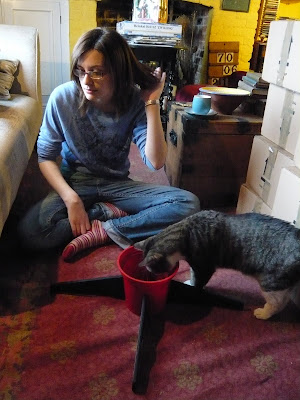 But it was worth it in the end. 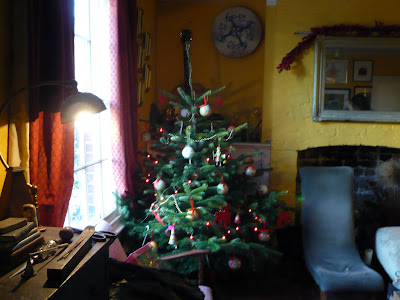 Everybody may now say aaaahhhh.


Watch out for the mistletoe ;) 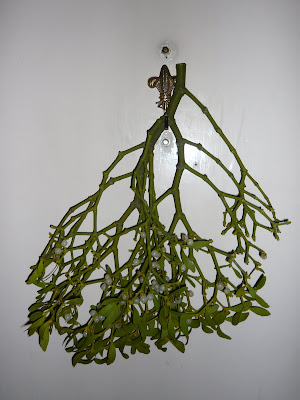 Finally, the by now traditional Saturday peek in the notebook:

Idea for a one panel cartoon #568
A traditional nativity scene. Everything is normal scale except for the wise men, who are the size of action figures.
Caption: Wee three kings.

Idea for a one panel cartoon #39
A ventriloquist act, performing on stage. The vent's puppet is a large seagull.
Caption: Speaking out of tern.


I'll be here all week. Don't forget your waitress.

Dukeleto said...
This comment has been removed by the author.
9:22 pm

Truly the Christmas-tide is upon us. I'm sorely tempted to write a 40K short dealing with how the populace may indeed deal with holy days. I'm thinking something vaguely Vostroyan, perhaps in a Gulag style prisoner camp.

Idea from me #1:
An enthusiatic groundskeeper has sculpted a topiary from last year's Christmas tree into an alphabet letter.

first post w00p!
Happy Christmas to you all, and a happy birthday to Nic. Kitten's was last week, and it's always a struggle to make it special for her, hopefully I managed it!
So looking forward to Prospero Burns and Ultramarines. They're both on my Xmas list, but so is a Wii and Goldeneye 007, so I dunno what will happen...

I feel like I'm being robbed on the cock-spanking front.

Er, that last comment doesn't seem to be displaying properly, apologies. The link is here.

For Christmas I shall be getting a replacement mp3 player from my mum. There's a computer game, a copy of Space Marine by Ian Watson and a mystery box from my brother, a 'surprise' from my dad because, when asked, I said there was nothing specific that I wanted and a jar of awesome sauce from Tim.

All that was on my Christmas list was the replacement mp3 player because my faithful one from three years ago no longer holds it's charge. Anything that I actually want....I buy myself. I find gift receiving exceptionally difficult.

The only 'tradition' I have at Christmas is to sit up until after midnight playing some form of computer game....which all came about with a push to finish Dawn of War when it came out before Christmas Day....stayed up until 4am playing it. Last year it was the Dante's Inferno demo....this year, potentially the Dead Space 2 demo but most likely Assassin's Creed Brotherhood.

Though nowadays a Christmas Eve evening snooze has started, once I get home from work (usually around 4pm).

Oh and I'd love to spend Christmas with Sanguinius and Leman Russ.

Russ would enjoy the snow....and I somewhat suspect Sangy knows his way around a kitchen.

@Xhalax - when Sanguinius has finished here, I'll gladly send him your way. Even better... we'll all get together! :)

Our tradition is simple:

Decorations and tree:
Xmas eve. Goes alone with the other prep work like pastry, pies, etc.

I love this time of year.

Merry Christmas to you all.

Sorry for the delay in posting Dan, but i am just on Act 3.."The Account"
Kaspers gonna re tell the Murder Make. Everything about the book is original so far and way beyond EXCELLENT...im so in to it i have not put it down! ok gotta go its all coming together real fast post ya real soon!

Rob Ashley White said...
This comment has been removed by the author.
11:46 pm

I'd love to spend the holiday period with, naturally, the Lion.
I'd get him somewhat 'jolly' on mulled wine and listen to him warble on about how the trees of his home are considerably better than the trees that find themselves in an abundance of front rooms come xmas time.

When he's even more 'jollier', I'd then enjoy watching him curl his ashen-blond locks by using the candy sticks hanging from my very own tree and laugh heartily at just how playful Primarch's can be when not on campaign for their father, beloved by all.

When he eventually is so jolly that consciousness slips his mind, I, along with a few watchers in the dark, would then set about using the empty stockings, which contained our many oranges and coals, as socks for the Lion, to keep him warm whilst in his drunken slumber.

I would then take photo's and post on VisageBook, upon which a Mr Leman Russ would simply comment:
'Pffft! What a bloody lightweight'

The room would then be filled with the festive, hearty laughter of the helium-induced sounding Watchers, and me, watching on as they attempt to carry him home... with no small amount of difficulty.

Merry Crimbo to all!

Well I'd love some metaphorical warm socks for all the stomping around fenris ill be doing with pb. I expect ill get something of a £value that I don't match!
Think I'll ask her to check with my fellow black library fans so she would know the ultramarines movie is top of the list, meh if I don't get it ill treat myself anyway!
I think I'd choose vulkan, who else would be king of roasting!

That last cartoon is too much. Ultramarines dancing in a euroclub indeed! :P

I would wish to spend Christmas with Leman Russ. My Viking/Hun ancestory aside, Russ and his Wolves would know how to put on a party, beer Fenrisian Ale Wenches and all :)

We always watch "Singing in the Rain" on Christmas Eve, and socks are always on my Christmas list, although I'm rarely taken seriously on this one. Dan bought me socks with pompoms on last year, which was awesome sauce! I proper LOVE socks! They do have to be gorgeous, though, none of your three-pack nonsense from Primark!

Go on, laugh, you know you want to!

First post here, although I'm a proper fan of yours Dan, to tell you that I got my copy of PB 2 days ago, and have been rushing the read of The First heretic ever since so I can start on it as soon as possible!
As for the Primarch for Christmas situation, I'd have to go with Chris on this one: Leman has to be first choice!

Over the last few years the tradition has been to go up to my Grandmars in South East London for a few days (Christmas day and Boxing day this year)
A new tradition since last year has been to listen to a "advent callender" of covers all of which can be found on this blog site (this years: theoreticalgirl.blogspot.com/2010_11_01_archive.html, last yeaes can be found easily enough) most, even though they are not Xmas songs, do fit in with the season.
Merry Christmas one and all :)

Oh, I too have no Idea how to link stuff either it seens, doh

Hey I cannot believe that nobody has got fairytale of new York as their favourite cristmas song that's mine.
Primarch? Well its hot to be guilliaman hasn't it wait.... Is that how you spell it?

Got to be. damn it sorry missed the error

As others have commented, the only Primarch worth bothering with at this time of year is Russ; mostly because he's a complete pisshead and therefore at home in most uk households over Christmas.

Music: Rat Pack at Christmas and the glorious a we wish you a metal christmas ; the highlight of which is Ronnie James Dio singing "god rest ye merry gentlemen" with Tony Iommi on guitar

Is the account of Bjorn's arm getting cut off canonical? Because previously it was stated that Valdor cut off Bjorn's arm.

Also, may I take the opportunity to state two things: I got my copy of Ultramarines (albeit w/o any confirmation email of any sort...movie was still pretty damn good, though) and Prospero Burns RULED. It was a bit confusing in the beginning but it all came together at the end.

1) Thanks for Prospero Burns and Ultramarines! You are my best Santa this year!

I think spending the holidays with the Primarch Leman Russ would be the best. Because damn, does he know how to throw a party.

Screw the Primarchs, I'd like to spend Christmas Day with the Emperor! So I could kick him in the jingle bells!

I am looking forward to the next Ghost's book. Right now my Christmas list consists of a slew of Eldar and Dark Eldar models including Forge world stuff and a New MP3 player.
Prospero Burns is on there too, but I think that may be a present to myself as soon as pay day rolls around

In Germany it's feeling like Fenris too. I Cant' think of when we had this much snow.

The Primarch of choice would be either the Lion or Russ. Or even better: both. With me as the mediator and the right ammount of mulled Rhineland wine (or fenrisian mead), they could finally settle their bad blood and overtrump each other wiht battle annecdotes, unitl Russ plays it too far and they end up brawling in my living room.
I hope the Imperium's insurance company pays for the broken furniture.

P.S.: Having finished The First Heretic recently, I can't wait for PB!!