Today was the shortest day of the year, we were snowed up the ying-yang, and the winter solstice's full moon was marked by the first total eclipse since 1638. No better time, then, to spare a thought for the Sixth Legion Astartes.

There was probably no one waiting more eagerly for the publication of Prospero Burns than Buff (formally “Big”) Steve Bissett, friend of this parish. Earlier this week, Steve very kindly sent me a review of the book, which I would like to publish here in its entirety. If you are easily alarmed by such phrases as “cock-spankingly great”, look away now.

“Lets have this out straight now this is an excellent book. This book goes above and beyond the call of duty. It would be wrong of you to assume that this Account of events leading to the Fall of Prospero is an exact and opposite retelling of Graham McNeill’s Thousand Sons..it’s not. The telling of this saga starts out with roots like a great Fenrisian oak and ends up blossoming into full on 30k warfare, brought to you as only Dan Abnett and the Sixth Legion Astartes can. When I heard Dan was going to cast his lot with The Wolves I thought HELL YES! It would be fair to say that Dan had some concerns when approaching this subject matter: the Space Wolves of 40K can seem extraordinarily larger than life, sometimes more comic characters than Astartes. Dan’s worries about “Vikings in Space” were wholly justified, even the name “Space Wolves” in my eyes has always seemed a little jovial. With this in mind, and the added weight of responsibility to the dedicated and very loud and verbal Space Wolf fans, Dan sunk his Fangs into this challenge.
But trust in Dan! He has taken the Wolves and grounded them in his own particular way. He has rebuilt this legion from the ground up, his research has been impeccable. They are the Wolves we know but different, professional but different, darker, more sinister, cunning and, dare I say it... Scary! Yes, they are scary, all right, the kind of scary that worries even the Custodes and other Astartes. He has taken them and turned them ...well, Gothic. Even the Fang and its architecture is darker and more foreboding more like a Wolf’s lair, beautiful still, a miracle of engineering yes...just darker, we are talking.
The plot is intense. This book should come with a warning: many threads are sown in this book, and many are cut (LOL). Do not expect it to give you all its answers straight away. Like Dan said, stand with it and all will unfold to you in time. Dan has played to one of his greatest strengths: he has taken a story which could have been basically a 350 page book of drinking and bloodletting, and turned it into a story of conspiracy, intelligence, counter-intelligence, what you see you can’t see, what you know you don’t know. You would be just at home reading Eisenhorn or Ravenor when reading this account. Still it is an Account of the Wolves so there is still plenty of warfare: battle, stealth, vicious violence and slaughter in the way only the Wolves can do it and Dan Abnett can write it.
Of Primarchs and Legions, the Sixth, have now officially been given their place in the game. Questions have been asked and answered, and more have arisen. Leman Russ is ferocity and aggression personified. All Primarch’s are strategical and tactical geniuses: Russ’s place in the rankings has now been given and it is exceptional. He is lethal, loyal and he is FEARED! This is a curse as much as it is a blessing and there is a certain sadness about it, as he and his brothers know his place in the pantheon of Primarchs. Dan has really put himself into the mindset of the Wolves and things have now changed forever. So to all my Wolf Brothers (and Sisters) out there it’s time to take our place in the Hunt and, though it may alienate us, The Rout never wavers! We are sanction, and sanction must come to PROSPERO! HHHOOOWWWWWWWLLLLLLLLLLLLLLLLLLLL”

It is my understanding that Steve liked it a lot. Thanks, Steve.

I’d like to leave you today in the embrace of Gideon Ravenor, with this picture of the ”The Chair” by the peerless Nic Giacondino. Merry Winter Solstice, one and all. 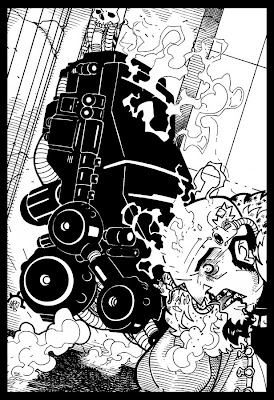 well, sounds like a good read, I'll have to pick it up as an extra christmas present for myself =) being an old SW player, before my own chapter took form.

As always, Nic's rendering of your characters is capturing and stunning ^^d

Wow, I really cannot wait for that book, I'm pretty sure it will be amazing.
As always looking forward to read another of Your book!

Have Good Christmas and Happy New Year, all the best from Glasgow!

I've ended up a fan of the Space Wolves because I feel a kinship with them, being a Viking myself. Reading the Ragnar novels (Dan, please, don't tell me Black Library won't finish the story for us!) just cemented the love for the Wolves. Not because it is the best literary work I've read but because it really entertains me.

After that I have started to enjoy Dan's writing as well in the form of 2/3rds of Eisenhorn, which I very much intend to finish and Ravenor after that. So now now I have a compelling reason beyond Steve's quite brilliant, in its own right, review. Both a writer and a subject I enjoy:)

But my concern is this, does it make sense to read the Horous Herasy novels in the order they were published or would it be "OK" to just jump in? I always want things in proper order but I never quite got if these novels are meant to be connected. Silly me!

Dan, congratulations on Prospero Burns, sounds like a smashing read!

Hey Hey i made it to the Big Time!
Thnks Dan for putting that review up, it geuinely was a bloody good read with plenty to attach to the Daniverse (i love that fact)
Flekkzo- This book you can actually just jump into and read mate. It would be good for you to read the others, but this one will stand alone. The invasion of Prospero happens slightly before the Heresy!

Why is Ravenor setting Lenin on fire?

Sredni - because he can. With his mind.

Dan - just picked up my copy of Prospero Burns from Games Workshop in Bluewater (very nice manager guy with a beard). Just need to finish the excellent "Gothic War" ad then I can start it.

Also very excited to see the coming soon section on Black Library listing Salvation's Reach (plus what must be the cover artwork - awesome)...

AND just found out that The Keeler Image is an audiobook by your good self featuring EISENHORN.

Simply fabulous - thanks for working so hard!

P.S. Would love to see more 40K fiction that references plots, themes and characters from the 30k HH series (am hoping there's some nice continuity with Chris Wraight Battle of the Fang (although this is clearly not 40k but rather 31/32k!!!!)

only up to chapter 6 of prosporo, but so far its been brilliant. The first battle sceen of the previous chapter was brilliant, the opponents/opponents society was a great idea in it's self (its great the way you can invent truly exotic societies in 30k that just won't fit in the 40k cannon).
Can't wiat to see how the book goes from here, or to meet Russ :)

"There was probably no one waiting more eagerly for the publication of Prospero Burns than Buff (formally “Big”) Steve Bissett, friend of this parish."

just watched ultramarines got to say I really liked it, in places the animation was a bit meh but the story and characters more then made up for it, hope the next one (if there is one) will be imperial guard that would be sweet.

I'm up to page 277 of PB, and I can't let it go, as soon as I get 5 min, I'm reading! As I live in Paris, I'm kinda smiling a lot as tidbits of the action take place in lutetia ^^
I would go even further than flekkzo about the ragnar series: I would be the happiest pup on terra if Dan himself was to take charge of completing the series!
(I'm prepared to challenge Buff Steve for the position of most eagerly awaiting of prospero burns: I've been a die hard fan of the Wolves of fenris for the better part of 10 years now, and I own every book written by dan on the 40k universe and horus heresy,AND i read triumff like 3 hours after it was published in paris's WHSmith ^^)

Hi, Dan, congrats for the great book, you've raised the bar once more.

I'm worried about the episode (sorry for spoilers, everyone!) on Nikea. How could it happen that the Emperor, one of the most powerful beings in the galaxy, didn't notice the presence of, hmm, Amon-like entity? :) Was it just a conscious (or maybe unconscious) trick of yours? Or is there, in fact, a sinister hint of his full awareness?

Sorry if someone had asked you this question before.

I have to say, I loved Prospero Burns. I've been a Space Wolves player since a Space Wolf Terminator appeared in the Rogue Trader painting guide I opened back in the day and I have to say I thought I knew a lot about them.

How wrong was I?!

I tore through Prospero in four days - pretty good going considering it was the last four days and I've had to work around Christmas!

Have to agree with Big Steve - I thought that the Wolves were always a bit comic-book but your story has turned them in to what they should be.

I finished the book last night. My girlfriend asked me how I found it and the best answer I could give was, "There are no Wolves on Fenris."

And I understood what it meant!

Damien- try 23 years , when i started being a Wolves fan Leman Russ wasnt a Primarch. It was even before the story of Prospero! man that makes me feel old.
The Wolves of Fenris is a great nickname but we should probably start calling them by there real name soon ( so as not to spoil it for thoses who aint read it)

this book is like reading/watching: dirty harry, dances with wolves, and some similar to The Third Man. (hard to generalize the espionage side of the book with out bring up dune or some thing like that) all in all very good book i could not stop took me like 17 hours straight.(talking book)chapter 8 and 9 thank you SO much for righting best part of the book bar maby the ending maby

P.S.
U killed long fang i know why and it was dun well and blar blar BUT U KILLED HIM grrrrrr that made me a sad panda

I just finished the book yesterday, after all that Heathrow flight cancellation chaos and whatnot.

I'm not sure about myself when I say this but I think you've outdone yourself this time. I liked this book even more than Eisenhorn and Ravenor series, or even Legion. The storytelling, the plot twists and the flashbacks are quite masterfully done, and every character was a page turner.

I could write a massive review about the book, I could write so much. But i'll just leave at this. Thank you for those 300-some pages, I deeply enjoyed them.

Dear Dan Abnett, Loved your Ultramarines stories,but I am rather dissapointed the Soundtrack of the movie was not emphasized as much as it should have been, will there be any chance for it to be released to the public? Im overly obsessed with the choir heard during the intro and the credits..