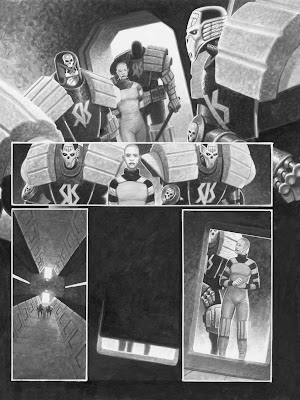 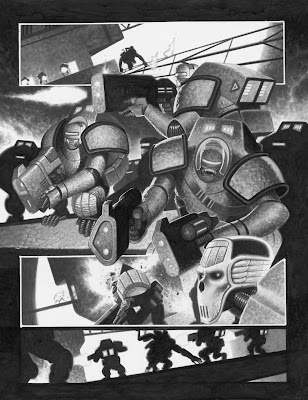 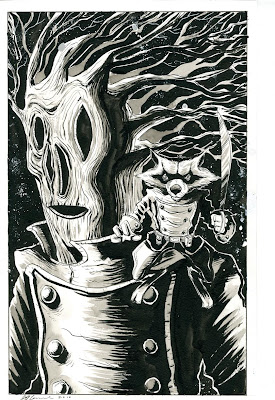 *looks around nerveosly surely this cant be right a dan abnett blog post with no comments, my big moment is here*

Sweet Bejesus you have a Judge Dredd story out there.
How do I get that?
What book and issues?
Judge Dredd is my Favorite comic character ever.
I would be thrilled if you started a run on Dredd.

Speaking of art, Mr. Abnett, I hope you'll forgive me for having committed fan art of a style unabashedly romantic of Eisenhorn and Alizabeth. >.>

I left it here: http://stardancer.org/art/eisenhorn2.jpg

"Story by me, art by Colin McNeil."

that's story by Dan and art by Colin Macniel of BLOODQUEST fame!111!1 Looks like I may have to buy my first 2000AD in a while...

scuse the double post, but mcahogarth that's an awesome sketch. Are you on Deviantart?
If so (or you feel like joining) pls check out our Dan fan club http://the-sabbat-worlds.deviantart.com/

Insurrection II?! I was a stroppy little skinflint and stopped buying the Meg a couple of months ago over a matter of pennies, but I'm not going to miss this one!

I have missed Ole Stony Face. And the first Insurrection series was superb.

Oh, cool! Yes, I'm there as mcah (though I only post sporadically, when I finish big paintings). I'll go check it out right now. :)

@Dukeleto. Insurrection will be appearing in The Judge Dredd Megazine. The monthly spin-off from 2000AD, not in 2000AD itself.

It's been great to have Ray & Finny back in 2000AD. Looking forward to seeing where this arc goes, and just what's up with Charon...

Also, picked up issue #6 of The Thanos Imperative yesterday and Dan, you and Andy are a glorious pair of SOB's, in the nicest possible way of course ;p. Maybe it was the fact it hit on Armistice Day, but it brought a genuine tear to the eye.
And whilst I hope we see more from DNA playing with Marvel Cosmic (looking forward to Rocket Raccoon & Groot!), if this is how the journey ends, what a way to go.
Guardians of the Galaxy indeed....

Please Dan give some juice info about Salvation Reach! I so long waited for it from the time i bought hardback of Blood Pact last year!

I concure with anonymous! We beg you Dan - give us some info about Salvation Reach! We need some ghost stuff! And a suggestion from your funs - please killed some major Ghost character in your next book! It was 2 books from the time when we cry about ghost X who died not glory but simple stupid death! You are best in that!

1) Please some info about Salvation Reach?

2) When does we saw Sons of Sek against Gaunt Ghosts?

3) What legions of Chaos Space Marines serves under Anakwanar Sek? Is he a simple human? Amd why CSM served him?

4) Interceptor city planed for what year?

5) Dont give up on Gaunt Ghosts fans we always support you!

@Anon re. Uexkull's Chaos marines that hunt the mission team in Traitor General could originally be from any of the renegade legions, altho some are more likely than others.

They're probably from an Undivided legion. They're not Berserkers, Noise Marines, stinking Plague Marines or mindless automata, slaved to a sorcerers will. They're not incredibly stealthy or cunning, so Night Lords or Alpha Legion seem unlikely. They're not fanatically loyal to their legion, since they follow a once human champion, so they're not Black Legion, and since they chafe at being garrisoned on Gereon, they're not likely to be Iron Warriors. They do mention praying for a worthy challenge, particular devotion to the dark gods is a mark of Word Bearers, so that's a possibility.

The other is that they are just a warband of renegades, possibly from a post-Heresy traitor Chapter, like the Astral Claws, possibly deserters from a loyal Chapter, there's no way to know for sure, and it doesn't really matter.

As for the reason they would serve a "mere" human master, the Anarch is no mere human. He may once have been, but a fully fledged Chaos Lord is a much more formidable being, a worthy liege-lord even for mighty Traitor Marines.

The main lesson of Traitor General is that the politics of the Archenemy are complex. At least as much so as those of the Imperium. Just as Astartes can be found under the command of Inquisitors, Army commanders and planetary governers when the occasion demands, so their fallen brethren serve the will of their gods, however feeble the vessel that conveys that will.

Argh! I think I saw the word 'Thanos' just then! Nobody spoil issue 6, please - I'm still waiting for my copy to arrive! Thought I had it in the post this morning but it was a Batman. I've never been so disappointed to see a Batman comic!
XMX

Is it bad that I'm a little glad you aren't coming to Leeds next weekend? It's my boyfriend's birthday and ever since I saw the Thought Bubble flyers I hadn't had the heart to tell him you'd be there because I'd already booked tickets to whisk him away to Bruge. Now my concience is squeaky clean and we shall see you next time.

awww damn, the MATCHES are called Lucifers. For a while there I thought Lucifers were the Black cigars and got very excited ;-)

Duke Leto - Did you put your hand over you mouth when you mentions the Anarch, who name drowns out all others, name?