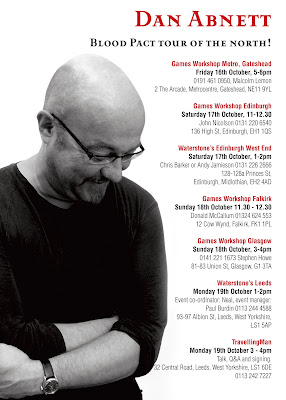 That poster makes me lol.

Is the book actually on sale before the tour? BL has it listed for November...

Im going to try my very very very best to make it to the edinburgh date, even if its just for half an hour O:

It's a great pic, though. Just a little jarring with the title "Blood Pact Tour."

Excellent - Will see you in Leeds - probably for both.

You mentioned in one of your videos that we might be seeing more of Loken. What about Saul Tarvitz and Ancient Rylanor?

Rob - Lol! That would work.

Rob - you wish you were in scotland? hahahah WHY?!

And what may I ask, is wrong with Scotland? I found it a perfectly splendid place and would take any excuse to go back for a visit.

I would also postulate that Scottish weather is not currently alternating between triple-digit temperatures and raining sideways, as the capricious skies of Texas have done today. (Then again, the last time I was in Scotland there was a massive blizzard, but since I grew up in the tropics, the sight of sidewalks covered in two feet of snow just made me really excited.)

What is wrong with Scotland.

Scotland is a small country, filled with about 5 million people, Most of which are racist, arrogant, tracksuit bearing anachists who get a kick out of shooting dogs with air rifles and beating each other up. It may have magnificent scenery and all that jazz, but the people are revolting. Trust me..

Thanks for tarring us all with the same brush as the ****wits that have obviously soured your view...

Im from scotland mate, I said Most. There are some Really ace people here, but the majority, No thanks.

Forgive me for reiterating, but your stories of Scottish behavior will not shock me because: I live in Texas.

Let me assure you- when people shoot animals here, they don't use air guns.

Haha, I appologise, I think i might have spoken out turn towards the scottish people, the truth is im just not a fan of it at all.

Rory - Most of us have a rather negative view of the general populous of the places that we live. I know I do of those of us who reside jnthe north east of England. Though in truth, the north east isn't half as bad as I mght decide it is.

Cunning insight, as usual. To be close to someone is to see all the pores and pimples, and we rarely become frustrated with those we don't come in close contact with.

I really like Texans, actually, partially because of the extreme behavior some exhibit. (Which really varies in places, because it's a huge state- Dallas is very different from Austin, which is wildly different from San Antonio, El Paso or Amarillo, and the sub-societies around those hubs have their own variations on Texan culture.)

i missed a class at school because i was so engrosed in it, dint even hear the bell. The Ending was fantastic. Well Done Dan!

Blood Pact reads like Major Rawne & Co return to form, being absoloute bad asses, and now seem they are corrupting the goody goodies of the Regiment hahahaha love it!
i played Kill team the other night as the Ghosts, against my own Blood Pact.......Very Satisfying indeed!
I got to be the good guys that are Bad ass!
Next im gonna play as a Blood Pact Kill team which seems to be inkeeping with what ive heard about the books storyline!
ooooooooo im gonna be bad...reeaally bad hahaha
time for me to slip on my Grotesque and let out my battlecry gonna get me some Ghost's hahahaha

Rory pal, I'd be lying if I said that your rant about Scotland couldn't be viewed as being a trifle simplistic, if not downright offensive, but I'm going to pay devil's advocate here and put it down to dry wit and the ancient Scottish art of self deprecation, (A major national pastime among us!).

I can't make it that day, but may send a ginger clone along in my stead.